By Tukang PosMarch 1, 2015No Comments 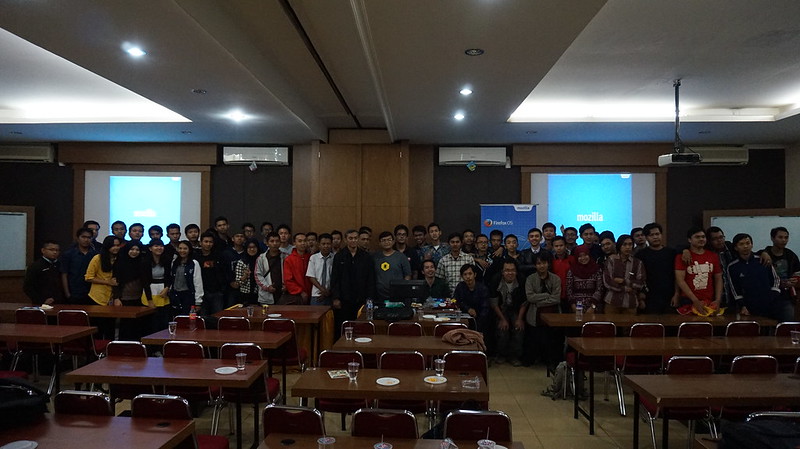 #FSLFirefoxOS starts with a forewords by Basuki Suhardiman, Head of Comlabs ITB. He’s really appreciated Mozilla for bringing Firefox OS to the world. He hopes that Firefox OS can open opportunity for developers in Indonesia to create easily apps for specific needs in Indonesia like apps for fishers and farmers. Then, I gave a presentation about ‘Introduction to Firefox OS’. I shared about what Firefox OS, why Mozilla develop the OS, great features of Firefox OS that brings great smartphone features in an affordable phone and opportunities for developers to develop Firefox OS apps or even contributing to the development. Then, Fadhil came in and shared about a quick look on Firefox OS app development. He shared the architecture of Firefox OS, how easy to develop Firefox OS using WebIDE on Firefox Developer Edition and submit apps to Firefox Marketplace. He also gave a demo how to use WebIDE and Firefox OS Simulator. After we close the event, we let all attendees to get hands-on Firefox OS devices. We brought Flame, Keon and Infocus TCP tablet to the event. They are very enthusiast on trying those devices. Most attendees love the devices and keep asking when Firefox OS device is coming to Indonesia. In the end, we have a mandatory group picture ☺ — See you in the next event!